More Good News on the Vocations scene in Dublin 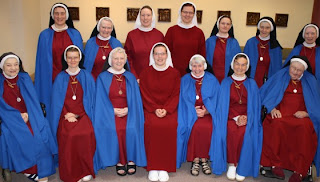 As regular readers of this blog will know, I have great admiration for the Redemptoristine nuns (pictured above) who live nearby at Saint Alphonsus Road, Dublin 9. You will also know that this cloistered and contemplative community have been very successful in the past few years in attracting new members to their community. Last week, another significant event in terms of vocation and new membership took place in their community chapel, when Sr Maria received the habit and the veil of the Redemptoristine Order. Sr Maria is from Slovakia and she brings to five the number in formation in this community of thirteen. This is a remarkable achievement for these prayerful and joyful women. Sr Gabrielle (the sister in charge) tells me that there is a steady number of enquiries about their life and work.
To know more about the Redemptoristine nuns in Dublin, please visit their website here, and for more pictures of the reception of the habit of Sr Maria, please see their blog entry here.
Posted by Unknown at 12:53 PM No comments:

The continuing need to pray for vocations 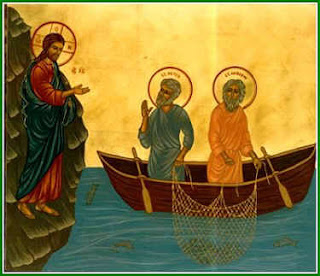 I am always heartened to hear of groups of people who take on the responsibility to pray specifically for vocations to religious life and priesthood. Both evidence and experience point to the fact that the numbers of people, parishs, groups and communities engaged in vocational prayer are growing all over Ireland at a great rate. It is worth noting that the prayers of these people are not being left unheard. Although statistics and figures are not yet readily available to hand, it appears that in Ireland this year there will be a significant increase in new members to religious life (male and female) and to seminary.
I suspect that many will find this to be somewhat strange considering the very difficult situation in which the Irish church finds itself. However, it is the continuance of the prayers of ordinary people along with the inspiration of God that continually prompts people to respond in a generous way to follow the Good Shepherd. I have heard people question why young people would, in this current climate, test their vocation in the church in Ireland. I have also heard their motivation being called into question. It is evident to me and others in vocation ministry that those now testing their vocation are a much more mature, reflective and prayerful generation than in the past. A final, but very important point to stress is this: the new generation of candidates have never known the Irish church to be any other way than the way it is now: a broken church and a church beset by scandal. But they are acutely aware that the mission to spread the good news of the Gospel is needed now more than ever. That's the ultimate reason that they are making this radical choice at this time - and it is the reason why we need to continually pray for vocations.
Posted by Unknown at 12:04 PM No comments:

There has been some coverage recently in the Catholic media in Ireland and Britain about the transferring of some candidates for priesthood (seminarians) and priests to a 'conservative' French (religious) community. The community in question appears to be the Missionaries of the Most Blessed Sacrament in Toulon.
It has been reported that many of the Irish bishops are concerned about this and that there is a broad agreement among the hirearchy in Ireland that Irishmen interested in the priesthood should be encouraged to join Irish based dioceses and congregations. It is estimated that 'a few dozen' Irishmen have joined congregations outside the Irish church in recent years.
While I agree that, as far as possible, men from Ireland should be encouraged to join Irish dioceses and religious orders in Ireland I am left with some questions. What is it that the dioseses, seminaries and religious orders and congregations are not offering to these men who undoubtedly have vocations? Is is tradition, authenticity, identity - or the lack thereof? And who can blame men (young and old) who seek to follow the Lord elsewhere when there is a distinct lack of interest in promoting vocations to priesthood and religious life in Ireland?
Posted by Unknown at 11:41 PM 5 comments: