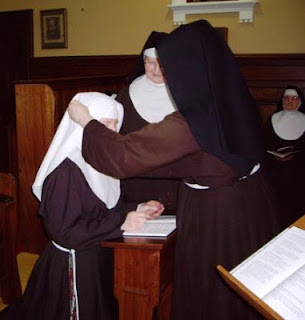 Here at Irish Dominican Vocations we are always delighted to hear of good news stories about vocations in Ireland and are only too happy to share that news. Events like, receptions, professions and ordinations in Ireland tend to make the news much more so today than in the past because of the fact that they are so rare. But, we are happy to promote the good news of other orders and dioceses because they are a real source of encouragement to men and women who might be considering a vocation themselves. This good news needs to be highlighted because it gives great encouragement to all involved in vocations ministry in Ireland.

Firstly, the Poor Clare nuns in Galway had reason to celebrate recently as they clothed Sr Brigid Marie of the Sacred Heart in the habit of the Order on the eve of Pentecost. The Poor Clares in Galway have had some media exposure recently - particularly with the success of their best selling book 'Calm the Soul' (available nationwide in Ireland through bookshops and on www.amazon.co.uk). We send our best wishes to them and to Sr Brigid Marie as she takes on the life of the contemplative community in Galway. 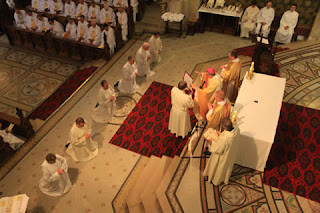 Image from the diaconate ordiantion ceremony in Maynooth on May 26th

Secondly, six deacons were ordained in the national seminary in Maynooth in Co. Kildare on Sunday last. The six, Sean Flynn from Tuam, Stephen Gorman from Raphoe, Ben Hodnett from Cork & Ross, Seán McGuigan from Armagh, Dominic Meehan from Cashel & Emly and Colm Murphy from Dromore, came to their studies for the priesthood from diverse backgrounds including accountancy, teaching and one was a funeral undertaker. We wish them every blessing as they continue on the path to priestly ordination.

Posted by Unknown at 1:03 PM No comments:

The fifth instalment of the video series on the Creed to coincide with the Year of Faith by the student brothers at www.dominicansinteractive.com features Brother Damian Polly OP. In this video clip he focuses on the central part of the Creed - the Incarnation.

The sixth installment of the 'Credo' video series looks at the death and burial of Jesus.
Ms Rosemary Swords is interviewed on this part of the Creed which can be watched above.

Follow the full series on the Creed along with other reflections and interesting articles on www.dominicansinteractive.com
Posted by Unknown at 4:30 PM No comments:

The friars of the Polish Dominican province recently celebrated the priestly ordination of ten of their brothers in Krakow. There is a strong link between the Irish and Polish Dominicans. Here in Ireland we were particularly happy that four of the brothers who were ordained spent some time in Ireland studying theology in our studium in Dublin. Our congratulations to Fr Arnold Pawlina, Fr Lukas Detmar, Fr Wiktor Komarnicki and Fr Rafal Wedzicki and the six other brothers. May they have a happy and fruitful ministry in the years ahead. 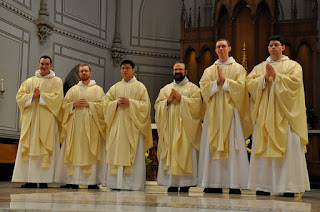 The Eastern province of the Dominican friars in the United States celebrated the priestly ordination of six of their brothers today, May 24th, 2013 - which is also the feast of the translation of the relics of Saint Dominic. This province, under the patronage of Saint Joseph, is extremely successful in attracting vocations. Irish Dominican Vocations sends prayers and best wishes to the newly ordained and to the Saint Joseph province. 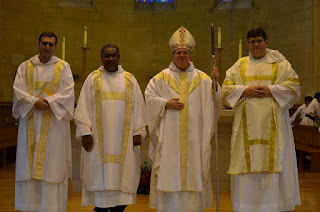 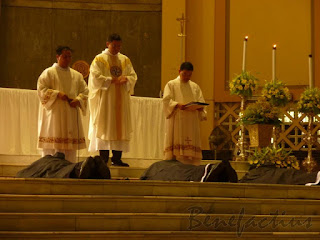 At the end of April, the Dominican province of the Philippines celebrated the solemn profession of three of their brothers. Congratulations!

Please continue to pray for vocations to the Order - and especially to the Irish Dominican friars.

It is very encouraging to hear the new bishop-elect of the diocese of Kildare and Leighlin  (the home diocese of this blogger) Fr Denis Nulty speak about prioritising vocations as he takes up his appointment in the near future. Fr Nulty is one of a number of new bishops appointed in Ireland in the past twelve months - he is, to my knowledge, the first one to mention vocations in this way.


At a time when the numbers of men and women entering religious life and seminary in Ireland are at a record low, it has been interesting to note that there has been little by way of urgent response from those charged with the promotion of vocations. At face value it would seem that the church in Ireland is content to continue along the path of doing very little to arrest the current downward trends.

While the statistics tell a sorry story, it is even more depressing that there is little by way of leadership on the matter. In any other form of life, there would be a comprehensive review of the situation and an attempt to put right what is wrong. Within the context of the Irish church, there is a tendency to point the finger of blame at all sorts of external difficulties ranging from the unfriendliness of the media to the lack of interest of the young in the Church. It is more striking that there has been very little by way of reflection within the Church itself in order to deal with the situation.

There are several ways in which this could and should be done and I list some suggestions below:

There is much more than the above to do, but if the process does not begin soon we will be missing the opportunity to make a real difference in highlighting the call of the Lord to the hearts of those who might consider a vocation in His service

Posted by Unknown at 9:11 PM No comments:

110 Years of Profession of Irish Dominican Nuns in Fatima, Portugal 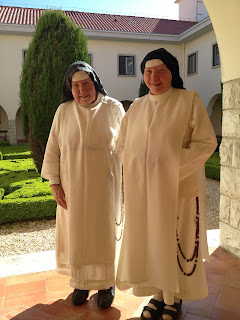 Sr Diane OP from Enniscorthy and Sr Angela OP from Cabra, Dublin
A pilgrimage to Fatima in Portugal has provided me with the opportunity to visit the Dominican nuns at Pius XII monastery located in the town. The monastery is relatively new having opened in Marian Year in 1954 and the international community of nuns has had a strong Irish influence over the years.
Today I met with two amazing sisters who between them have lived 110 years of professed religious life in that monastery. Sr Diane, originally from Enniscorthy in County Wexford joined the new community prior to its official foundation and has been in Fatima for 60 years. She recounted today the story of how she came to be a Dominican nun having earlier tried her vocation as a Loreto sister, then subsequently as an office worker. A feisty woman, she has held many posts of responsibility in the cloistered community. The dynamic Sr Angela from Cabra in the northside of Dublin who maintains her strong Dublin accent remined me that on Monday (May 13th) she will be celebrating her 50th anniversary of entering the Order. Joy and happiness of living the contemplative life marked the tone of our conversation. Despite many struggles, the community now has a novice and has enquiries about their way of life. They maintain great hope that the nuns will be able to continue to serve the many pilgrims who come to our Lady's shrine at Fatima. Their twofold mission of prayer and spreading devotion to Our Lady of Fatima is as necessary today as it was when the monastery was founded.
I felt proud of these two extraordinary Irish women who live the Dominican charism in quiet contemplation and who continue to give an example to the world of the gift of the vocation of the Domincan nuns. Long may they continue to flourish.
For more information on the life and mission of the nuns, please visit their website: http://www.fatima-dominicans.com/﻿
Posted by Unknown at 11:15 PM No comments: 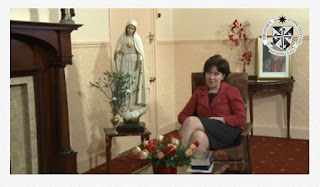 "One Lord Jesus Christ" is the object for discussion in the fourth instalment of the Credo video series from the Irish Dominican student brothers.

Dr Carole Brown is interviewed on the identity of Jesus Christ touching opinions in other religions about Jesus, Old Testament background to Christian belief in Jesus and, of course, evidence from the New Testament itself.

Follow this link to the student brothers' website to watch the 30 minute video: http://dominicansinteractive.com/series/credo8/445-credo-series-episode-4
Posted by Unknown at 7:41 AM No comments: 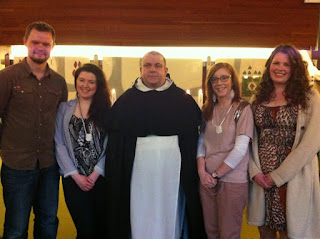 
A newly formed lay Dominican chapter in Belfast received two new members at a special event in the Catholic chaplaincy at Queens University Belfast last night (May 8th, 2013). The chapter which is just eighteen months in existence and under the patronage of Blessed Pier Giorgio Frassati is the youngest chapter of the lay Dominicans in Ireland.

Karen Gilloway and Sorcha Nic Bhloscaidh are both teachers and were received into the chapter during the celebration of the Eucharist at the Catholic chaplaincy in Elmwood Avenue. They have spent the past number of months in preparation and have undergone a formation programme prior to being received. They join the present members Francis McCaughan and Lisa Hanna in the new chapter which has as it's mission the reflection on Dominican and church documents and the regular prayer life of other such lay Dominican chapters around the world. The chapter has already run a number of successful events to mark the Year of Faith.

The Blessed Pier Giorgio Frassati chapter is indebted to the Catholic chaplaincy at Queens University Belfast and the chaplain Fr Gary Toman for facilitating their presence and also for his tremendous support. The author of this blog is the spiritual promoter of the chapter.

The vocation of the lay Dominican is an important one in the life of the church and the Order. Lay Dominicans make a significant contribution by the witness of their lives as Dominicans and are a source of support to the local church. For more information on the lay Dominicans in Ireland visit their website: http://new.laydominicans.ie/home and for news of the Blessed Pier Giorgio Frassati chapter in Belfast you can follow them on Facebook under Lay Dominicans QUB chapter

Posted by Unknown at 1:20 AM No comments: 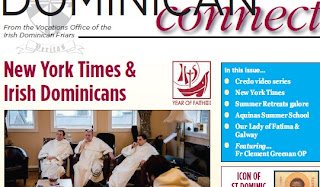 The May issue of the vocations' office newsletter also looks forward to the summer events hosted by the two Dominican Retreat centres - one in Cork, one in Dublin. 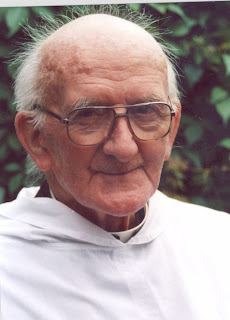 And finally, Fr Clement Greenan OP, (pictured above) the second eldest member of the Irish Dominican friars, is featured on page 4.

Printed copies of Dominican Connect May 2013 are available in Dominican churches and other centres in Ireland from the first weekend in May.