The Nine Ways of Prayer of Saint Dominic 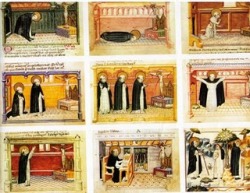 Saint Dominic was a man of prayer, both formally and informally. We are told that his nights were given to God in deep prayer. Dominic stood in prayer with his arms extended as if he were on a cross. During the days and more informally in the evenings, Dominic lived his prayer in service for others, always keeping in mind the reason why the Order was founded the salvation of souls. In the brief explanations below to the various ways in which Dominic prayed, we might remember that our own prayer lives, as Dominicans and those who would consider following the Dominican way, must extend beyond formality and into the practice of life situations. In attempting to do this, we incorporate the Gospel into our life's work and leisure so that our whole life is prayer. 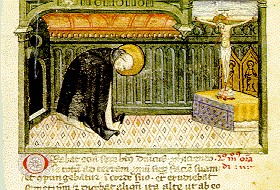 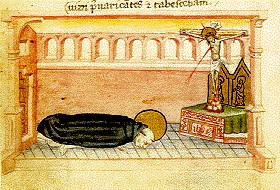 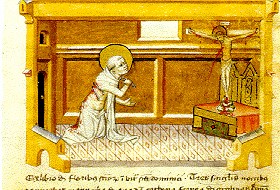 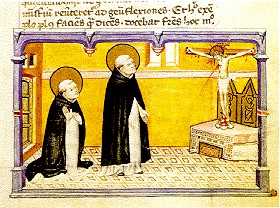 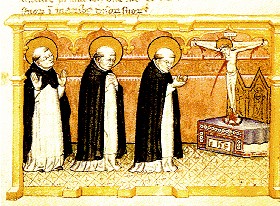 The fifth way of prayer of Saint Dominic
Saint Dominic's fifth way of prayer was to stand before the altar in contemplation with the palms of his hands turned inwards. Then he would clasp his hands and raise them to his shoulders all the while in fervent prayer. Again, he taught the friars by his example of prayer. It is said of Dominic that when he was travelling on the road that he would steal away, and standing still utter a word from sacred scripture. 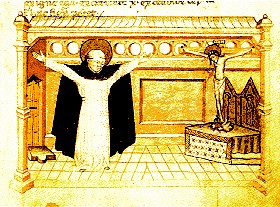 The sixth way of prayer of Saint Dominic
Saint Dominic often prayed with his arms outstretched in the form of a cross. He would often quote scripture appropriate to this posture: 'O Lord, the God of my salvation, I have cried in the day and night before you....' It is said that he practiced this method of prayer on special occasions and also this way of prayer is the one remembered when he restored the life of a young man in Rome. 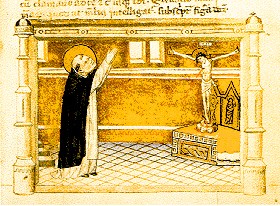 The seventh way of prayer of Saint Dominic
Saint Dominic was often found standing erect stretching his whole body upwards with his hands joined and raised towards heaven. Often he would open his hands as though in receipt of something. The friars would hear him praying aloud saying: 'Hear O God, the voice of my prayer when I pray to you, when I lift up my hands to your holy temple.' (Psalm 27) 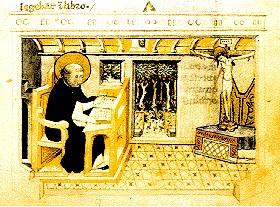 The eighth way of prayer of Saint Dominic
Saint Dominic's eighth way of prayer involved thoughtful reading of scripture or scripture commentary. He would lose himself both intellectually and emotionally in this reading, sometimes whispering questions posed in the text. When reading the Gospels, Dominic would sometimes lean forward, make the sign of the cross as if thanking God for some spiritual insight. He would often weep as if overcome with the beauty of the word of God. 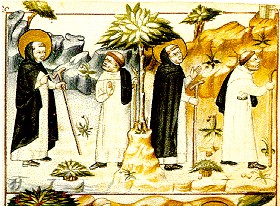 The ninth way of prayer of Saint Dominic
Saint Dominic practiced his ninth and final way of prayer while travelling, losing himself in prayer, meditation and contemplation as he walked.
This is a brief introduction to the 'Nine Ways'. They show Saint Dominic as one who was zealous in his prayer and who had a simple and ascetic lifestyle. He responded to physical discomfort by praising God and made austerity into a form of prayer. More than anything these nine ways of prayer of Saint Dominic points us to the fact that the pursuit of worldly things is futile and that the primary importance for Dominicans and all of humanity is our spiritual union with God.
Posted by Unknown at 7:47 PM

Email ThisBlogThis!Share to TwitterShare to FacebookShare to Pinterest
Labels: Nine Ways of Prayer of Saint Dominic