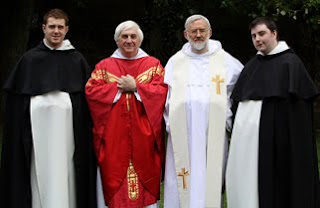 Brother Conall O Callaghan, Fr Eddie Conway (prior), Fr Philip McShane (novice master) and Brother Paul Hughes after the reception of novices today.
The Irish Dominican friars received two novices into the Order today at a ceremony during the celebration of Mass at Saint Mary's Priory church, Pope's Quay Cork. Brothers Paul Mary Hughes (Westmeath and St. Helen's, Liverpool) and Conall Mary O' Callaghan (Donegal) were clothed in the Dominican habit by the prior of the novitiate house of the Irish province, Fr. Edward Conway OP. Our new novices were joined by many of the Dominican brethren from around the Irish province along with their friends and families in a simple ceremony. Below are some images from the clothing ceremony. 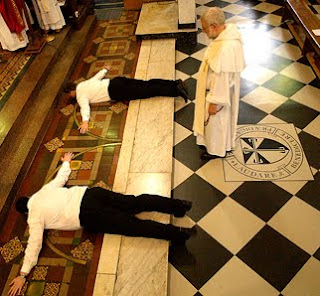 Asking for God's mercy and that of the Order, the two postulants prostrate themselves. 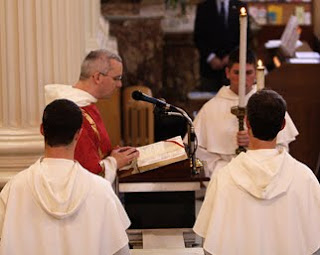 The Gospel is proclaimed by the deacon, David Barrins OP 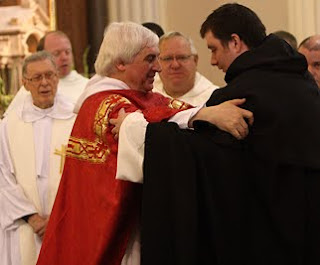 Brother Paul Hughes is clothed in the habit of theDominican Order by the prior, Fr Edward Conway OP 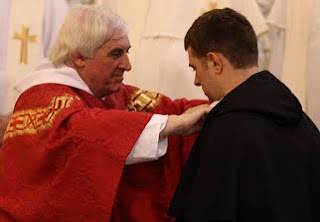 Brother Conall O Callaghan is clothed in the habit of the Dominican Order by the prior, Fr Eddie Conway OP 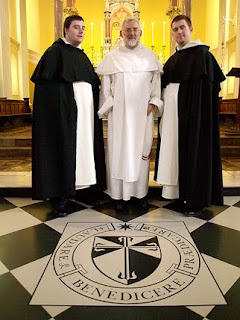 The newly clothed novices with their novice master, Fr Philip McShane OP
The Irish Dominican friars have further cause for joy today as Brother Alan Hopkins has rejoined the Order and will live with the novitiate community in Saint Mary's, Cork in the year ahead. He is pictured below with our new novices. Please keep our brothers Alan, Paul and Conall in your prayers as they embark on their journey into the Dominican way of life. 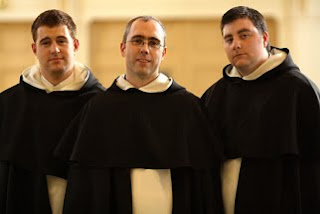 Is Alan a novice or a professed student? Anyway they shall all be in my prayers. Happy feast day for yesterday btw.

Hi from Oz. Is Alan a novice returning to the novitiate or a student? Anyway I will be praying for their perseverance. We have three novices in Hong Kong Brs Jordan, Francis and Robert. Please pray for them too!

Many congratulations and with my prayers.